What ‘Atlanta’ Gave Me | WIRED

The ancient city of Jeddah is being bulldozed 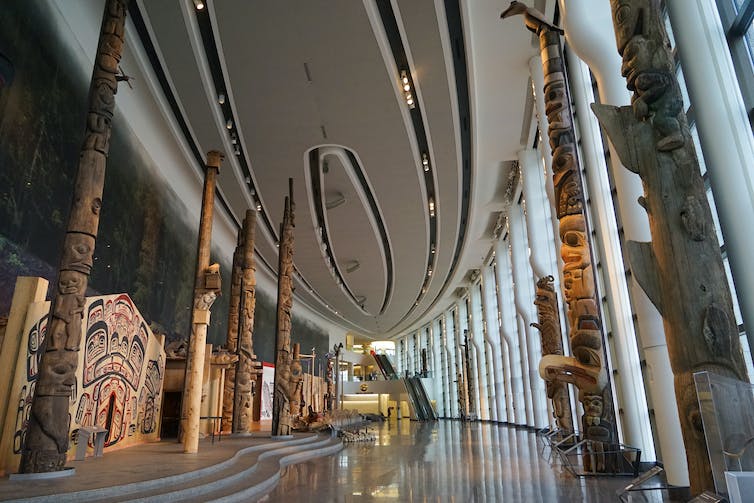 There is a wave of change underway in North American museums. Museums and galleries are re-evaluating their own places and roles in colonial history and discourse. This change has resulted in galleries being closed or decolonized across Canadian museums.

But are these moves enough to disassemble colonial ideologies and narratives that have underpinned museums for so long?

Museums have historically been recognized as authorities of knowledge and truth. They tell the story of nations and can influence and shape societies.

In the current politically charged environment, they are being challenged to reconstitute their roles in a way that goes beyond neoliberal settler colonialism and represents the voices of the marginalized.

Museums have always evolved to meet the needs and demands of changing societies.

After WWII, museums in the U.S. were concerned with recording and preserving history. Into the 1980s, museum practices were becoming more visitor-centred and the neoliberal free-market made them more corporate in nature. At the turn of the century, with the intensification of globalization, the relationship between museums and corporations deepened.

Now, new campaigns are pushing museums in the West to come to terms with their colonial legacies and to return artifacts stolen by imperial powers to their country of origin.

A rocky path to change

Over the past few years the path towards change has been disappointing, rocky and systemically ineffectual.

In Canada, the push for the decolonization of museums has involved greater consultation with Indigenous and local communities to go beyond nationally constructed narratives. However, these measures have been paltry and more concessional than inclusive.

During the Canadian Museum of History’s renovation project in 2012, Indigenous Peoples were expressly consulted about the changes being made to the museum. The consultations, however, were partial and served more as a way to legitimize decisions that had already been made by museum officials and the Heritage Minister.

The Canadian Museum of Human Rights’ initial reluctance to acknowledge the treatment of Indigenous Peoples in Canada as genocide is another case that demonstrated a lack of meaningful consultation with Indigenous communities.

What’s more, it revealed the settler colonial lens with which Indigenous history was viewed and presented in the museum. As a museum dedicated to human rights, the knee-jerk reaction of denying Indigenous perspectives in its presentation is especially telling. It demonstrates the simultaneous erasure of colonial histories and endurance of colonial perspectives in museums.

These cases reveal that lauded changes in museums are oftentimes more ceremonial than meaningful. They also remind us that institutional and systemic change is not easy to achieve.

In the context of repatriations, the return of artifacts has been small in scale, rife with political clashes and long and drawn out.

France’s process of repatriating 26 artifacts to Benin, initiated in 2017, is a prime example. The objects were returned to Benin in 2021 following much political handwringing.

French president Emmanuel Macron’s speeches consistently reminded everyone that France would not give up all stolen objects in its museums.

Repatriating the objects was further framed as a gesture of goodwill rather than an admission of wrongdoing.

Much pomp and ceremony was made out of returning 26 artifacts. The returns garnered France global attention as a European nation committed to change. Meanwhile, over 100,000 stolen objects from the sub-Saharan region remain in France.

France has since not made any significant commitments to return additional artifacts. It further continues to identify stolen objects as French heritage under its principle of inalienability. The principle states that objects in French museums are, and will remain, part of French national heritage forever.

Modern western museums’ intrinsic ties to colonialism raises the question of how they can be decolonized and reimagined as truth tellers with more inclusive and fluid narratives. While this is certainly not an easy question to answer, it is clear that decolonization is a continuous process that cannot be implemented by closing or “reimagining” a few galleries and exhibits.

Museums must be disentangled from national and corporate interests that guide narratives and reproduce dominant social norms. Structural transformation is needed which involves more diverse staff, especially in senior and executive positions.

Greater and more genuine inclusion of Indigenous and marginal voices is needed. Inclusions that go beyond politically correct check marks and liberal premises of toleration. As the UN Declaration on the Rights of Indigenous Peoples outlines, that requires giving those represented in museums control of their own cultural heritage and authority over how it is presented and reproduced for the public.

It also means incorporating perspectives that challenge prevailing narratives. As historian Amy Lonetree notes, it requires hard truths to be told to nations that have silenced different versions of the past.

Greater community engagement and including diverse voices can also eliminate barriers and foster equitable access. Museums have historically been designed for the elite class. One continuing socioeconomic barrier is that they can be quite costly. A visit to a Canadian museum or gallery can cost anywhere between $15 to $30 per person. For many families those costs can be prohibitive.

Change must also mean making space available for everyone.

Whether this new push to undo colonial narratives will bring about significant change in museums remains to be seen. What is certain is that to be effective, this change must go beyond the concessional and rhetorical.